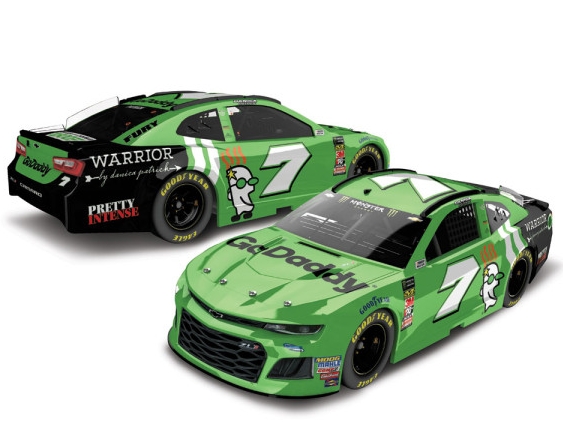 Media Availability…Danica Patrick, driver of the No. 7 GoDaddy Chevrolet Camaro for Premium Motorsports, will be available to members of the media at 11:45 a.m. EST on Saturday, Feb. 10, in the Daytona (Fla.) International Speedway infield media center. She will also be available to media during the Daytona 500 Media Day on Wednesday, Feb. 14.

Danica Double…Last November, Patrick announced she would close out her motorsports career by racing in two iconic events in 2018. Dubbed the “Danica Double,” Patrick will compete in the Daytona 500 on Feb. 18 and then make her final start in the legendary Indianapolis 500 in May. Her final two races mark the end to what is considered the most successful career of any woman in racing history – and the beginning of Patrick’s next chapter as an entrepreneur and business owner.

Back in GoDaddy Green…In mid-January, it was announced that Patrick would reunite with long-time partner, GoDaddy, as she closes out the final chapter of her motorsports career with the “Danica Double.” Her history with GoDaddy dates back more than a decade as the company signed Patrick in 2006, nearly two years before her record-setting IndyCar Series win in Japan. In 2010, GoDaddy helped usher Patrick into NASCAR as her primary sponsor, a role the company held through the end of the 2015 season.

A Familiar Face…For the 60th running of the Daytona 500, Patrick will have a familiar face atop the pit box as she reunites with her first NASCAR crew chief, Tony Eury Jr. The veteran crew chief led Patrick’s team from 2010-12 as she competed in the NASCAR Xfinity Series for JR Motorsports. During their time together, Patrick earned one pole award (Daytona – 2012), one top five and seven top-10 finishes.

On the Front Row…Patrick has earned two pole awards in her NASCAR career: one in Monster Energy NASCAR Cup Series competition and one in the NASCAR Xfinity Series. Both pole awards were earned in the season-opening events for each series. She earned the front-row spot for the NASCAR Xfinity Series race at Daytona in 2012 and the following year she became the first woman to win a NASCAR Cup Series pole award when she set the fastest time in qualifying for the 55th running of the Daytona 500.

Statistically Speaking…Patrick has more top-10 finishes at Daytona than she does at any other track on the NASCAR Cup Series circuit. She finished eighth in the 2013 Daytona 500 and earned another eighth-place effort at the track in July 2014. Patrick also holds the record for most top-10 finishes by a female in NASCAR Cup Series competition with seven top-10 results to her credit.

For the Record Books…In 2013, Patrick’s first full season in the NASCAR Cup Series, she started the year off by making history at Daytona. In addition to becoming the first female to score a NASCAR Cup Series pole award, she became the first woman to lead NASCAR’s most prestigious race, the first female to lead a NASCAR race under green-flag conditions and she scored the highest finishing position ever for a woman in the “Great American Race” when she took the checkered flag in eighth place.

Other Daytona Experience… Patrick has started seven NASCAR Xfinity Series races at Daytona and scored her best finish of 10th in July 2011. In her first stock car start of any kind, Patrick started 12th and finished a respectable sixth in the February 2010 ARCA Racing Series event at Daytona. Twice in her career, Patrick competed in the Rolex 24 At Daytona on the 3.56-mile, 12-turn speedway road course. In 2009, she finished eighth driving a Crawford Pontiac for Childress-Howard Motorsports. She made her first Rolex 24 start in 2006 driving a Porsche Crawford for Howard-Boss Motorsports. The team finished 24th after a mechanical failure just past the nine-hour mark.

Meet Patrick…Fans can meet Patrick on Thursday, Feb. 15, as the NASCAR driver signs copies of her new book, “Pretty Intense,” at the Barnes & Noble store located at 1900 W International Speedway Boulevard. The event is scheduled to start at 1 p.m. EST and a limited number of wristbands will be distributed at 9 a.m.

About GoDaddy…GoDaddy powers the world’s largest cloud platform dedicated to small, independent ventures. With over 17 million customers worldwide and nearly 73 million domain names under management, GoDaddy is the place people come to name their idea, build a professional website, attract customers and manage their work. The company’s mission is to give customers the tools, insights and the people to transform their ideas and personal initiative into success. To learn more about the company, visit www.GoDaddy.com.

Pretty Intense…In Patrick’s latest book, “Pretty Intense: The 90-Day Mind, Body and Food Plan that will Absolutely Change Your Life,” she offers a 90-day, high-intensity workout program combined with a protein-rich, paleo-inspired eating plan and a mental-conditioning program aimed at helping readers become leaner, stronger and healthier than ever before. Published by the Penguin Publishing Group in late December, “Pretty Intense” is available at all major book retailers. For more information, visit www.prettyintense.com.

Somnium Wine…Patrick fell in love with the Napa Valley region during a visit to the area in 2006 and started to dream of one day owning a winery. Three years later she purchased land in the Howell Mountain area and vineyard development began in 2011. Somnium Wine, named after the Latin word for dream, released its 2014 vintage in early 2017. For more information, visit www.somniumwine.com.

Danica Patrick, driver of the No. 7 GoDaddy Chevrolet Camaro for Premium Motorsports

Talk about heading to Daytona for your final NASCAR race.
“Positive vibes definitely play into on-track performance, and I’m feeling good energy with the sponsor and team we’ve put together for Daytona. My Cup career started out with Tommy (Baldwin, through partnership with Stewart-Haas Racing) and to end it working with him, GoDaddy and the team at Premium (Motorsports), it’s crazy to see how things really have come full circle. It just feels right to be back in the No. 7 GoDaddy Chevrolet again. It’ll be a great combination to close out this chapter for me.”

What is it about Daytona International Speedway that you like?
“I think I’ve always had the good fortune of driving for good teams that have good cars. I also think that my IndyCar background is very similar to the style of racing that the superspeedways bring to NASCAR. That was full-speed, flat-out, don’t-lift-if-you-don’t-have-to racing where you have to keep your momentum up and lots of big-pack racing. For me, that was a big comfort zone when I came over to NASCAR, that it was a lot like the IndyCar days of driving on mile-and-a-half speedways. It’s all about having an awareness of what’s around you, making good decisions and trying to stay out of trouble until the end.”

Describe the intensity of restrictor-plate racing.
“It’s super easy to drive around the track flat-out by yourself. It’s not hard at all. When you put all of the other cars around you, it’s not necessarily about how the car feels on the track, although that can be an issue, for sure, at times. It’s more about what everyone else is doing around you. You’re constantly looking at what’s happening in front of you. You’re also looking at what’s behind you. Probably more important than what’s happening in front of you is what’s happening behind you – who’s coming, who’s following you, who’s helping you move forward. There have been plenty of times that I’ve gone to the bottom and complained, ‘Where’s my help?’ It seems like I’ll slot in on the bottom line and then everyone behind me disappears. You really have to have people behind you, pushing you. The race is constantly evolving and you and your spotter have to be on it. It’s a big race for spotters, so having a really good one that you trust is very important.”

Why did you decide to come back and crew chief Danica’s team at Daytona?
“I’ve started this company (Fury Race Cars) and had a lot of fun with it — just helping kids and drivers that want to race. Danica called and asked if I would come do this race with her. I joked and told her, ‘Well, I got you into this mess, so I might as well help get you out of it.’ I have a lot of respect for her. When she came onto the scene, we had a lot of fun. I learned a lot working with Danica. She helped get me on this path to start helping kids with my company and I’ve had a lot of fun with it. We’re friends and have kept in touch over the years. So, it was an easy choice to come do this last race with her and GoDaddy. Back in our JR Motorsports days we joked our team’s hauler was like Key West, and she told me Daytona would be like 10 days in Key West.”

What challenges do you anticipate, if any?
“I think it’s going to be pretty interesting. They’ve changed the format of Speedweeks a bit. There are only two practice sessions before qualifying and then no practice between that and the qualifying races, so it’s a bit different than what I’ve experienced before. It may take a little bit to get back in the groove, but we’ve got a lot of support in place, so I think we’ll be fine.”

Do you feel any added pressure since this will be Danica’s final NASCAR race?
“I love Daytona and going down there for Speedweeks. Having this be Danica’s last NASCAR race will just make it more special. We’ve had a lot of fast cars down there and sat on the pole before (February 2012). We have to have realistic expectations heading into Daytona, but Danica’s learned a lot about speedway racing since we worked together, so it’ll be fun to get back down there with her and GoDaddy. When she reached out about doing this deal, I made her promise me she’d take me to Indy when she runs the (Indianapolis) 500 in May. That’s a race I’ve always wanted to go to, so I’m looking forward to experiencing that as well.”

Talk about running the Daytona 500 with Danica Patrick.
“Our team finished eighth in Daytona 500 last year and I know everyone at Premium Motorsports is prepared to give Danica the best opportunity we can to get another great result as she runs her final NASCAR race.”

“We have always believed in Danica – and how she is inspired to set big goals, even in the face of adversity. Anyone who watches her knows she's tough as nails. She takes risks and is all about doing what she loves, no matter what critics say. We invite everyone to join us in watching how this next chapter unfolds out on the track."