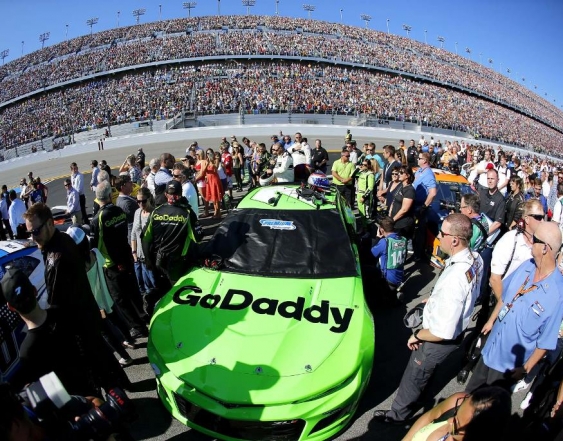 After starting Sunday’s Daytona 500 from the 28th position, Danica Patrick’s final Monster Energy NASCAR Cup Series race was cut short by a multi-car accident. The driver of the No. 7 GoDaddy Camaro for Premium Motorsports was credited with a 35th-place finish in the 60th running of the “Great American Race” at Daytona (Fla.) International Speedway.
Patrick cracked the top 20 at lap 12 and ran the top line for much of Stage 1 as she dealt with a loose-handling racecar. She was able to avoid a nine-car accident and was scored in the 15th position at the end of the stage.
Crew chief Tony Eury Jr. called for four tires, fuel and an air pressure adjustment when the team pitted between stages. Patrick started Stage 2 in the 11th position, and after dropping back to 22nd at lap 81, she was able to make her way back inside the top 15 by the midpoint of the race.
Patrick’s No. 7 GoDaddy Chevrolet was collected in a seven-car accident in Turn 3 at lap 102. The car sustained significant damage and the team was unable to continue. Patrick was evaluated and released from the track’s infield care center following the wreck.

Danica Patrick, driver of the No. 7 GoDaddy Chevrolet Camaro for Premium Motorsports
That’s certainly not how you wanted to finish out your NASCAR career. What was the first half of the race like for you?
"It was pretty decent. The car was a lot better than it was in the Duel and it was a lot better than practice. Tony Eury Jr., my crew chief, did an awesome job. The guys on the team did a really good job. I know we pulled this together kind of not that long ago – a month ago. It’s a tall order to get a car ready for a superspeedway that is competitive, but it was. I said earlier today that I feel like the whole thing was picture perfect with GoDaddy on the car, and it being that green again. It just wasn't meant to be, I guess, today. I am proud that we raced the whole race, other than a little bit at the end of that first stage when it looked silly with all the cars with tires and no tires. Other than that, we raced it and the car was competitive. That’s all you can do. That’s the gamble at Daytona. It can go so well, and it can go so awful. I'm grateful for everything. Thank you to all the fans. I still have one more (race). It’s not in a stock car, but I still have one more."

Next Up...
Patrick will close out the “Danica Double” with the 102nd running of the Indianapolis 500 on Sunday, May 27 at Indianapolis Motor Speedway.