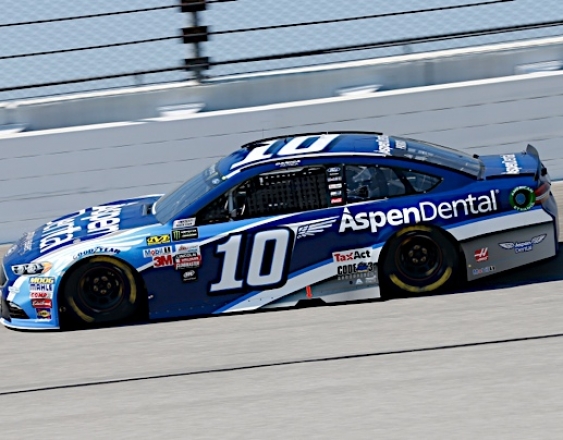 On Aug. 25, 2011, Danica Patrick caused a stir when she announced she would be leaving the open-wheel world to make a full-time run in the NASCAR ranks. A little more than two months later, she joined Stewart-Haas Racing (SHR) team owner Tony Stewart to unveil the schedule for a 10-race effort she would run the following season with the Monster Energy NASCAR Cup Series team.

Patrick made her first official NASCAR Cup Series start in February 2012 in the 54th running of the Daytona 500 at Daytona (Fla.) International Speedway.

The Kannapolis-based SHR team would expand from a two-car operation to field a third full-time NASCAR Cup Series entry with Patrick and, in the years since she completed her first laps in a NASCAR Cup Series car, Patrick has made history with the No. 10 team.

Patrick became the first woman to win a NASCAR Cup Series pole when she set the fastest time in qualifying for the 2013 Daytona 500.

She then became the first female to lead NASCAR’s most prestigious race when she held the point for laps 90 and 91, and laps 127 to 129.

Patrick became the first woman to lead a NASCAR race under green in that 2013 Daytona 500. Prior to that, Janet Guthrie led five laps under yellow in 1977 at Ontario (Calif.) Motor Speedway.

After earning the pole and leading laps, Patrick finished the 2013 Daytona 500 in eighth place, the highest finishing position ever for a woman in the “Great American Race.”

In 2013, Patrick competed in every NASCAR Cup Series race and became the first female driver to complete an entire season in the series.

Patrick has made the most starts of any female in NASCAR Cup Series competition and, last weekend, she became the first female in NASCAR history to make 250 combined starts in the three NASCAR national series.

Sunday, Patrick will make her 190th NASCAR Cup Series start in the No. 10 entry for SHR. The Ford EcoBoost 400 at Homestead-Miami Speedway will mark her last race in the No. 10 Aspen Dental Ford Fusion with SHR. After five seasons together and one pole award, 64 laps led, seven top-10s, 21 top-15s and 65 top-20 finishes, this chapter of history comes to a close for Patrick and SHR.

DANICA PATRICK, Driver of the No. 10 Aspen Dental Ford Fusion for Stewart-Haas Racing:

Tony Stewart recently said that you have more options than anybody in the garage in that you can do NASCAR, IndyCar, road racing, and you have your entrepreneurial career. Is that how you view things at this stage?

“I’m flattered by that. I work really hard and have really good people around me who believe in me. I have great opportunities, but I think the most important thing is answering, ‘What is it that I want to do?’ I don’t mean that from a conceited standpoint of just pick and choose, but you’ve got to love and want to do whatever it is that you’re doing and have your whole heart in it, or else you probably might not make it happen or you’re not going to give yourself the best opportunity to show what you can do. I think it’s a matter of evaluating options, but really being honest about what makes the most sense, what’s going to feel good, what do I want to do, and then really kind of being the architect of my life.”

What are your overall thoughts on Homestead?

“It’s a mile and a half, but it’s unique in that it doesn’t have the dogleg. I’ve had a couple of solid finishes in the Cup car and I’ve run well there in the Xfinity Series. I ended up second in my last IndyCar race at Homestead, so I’d say it’s a track where I have a decent amount of experience.”

The 2017 Monster Energy NASCAR Cup Series finale will mark Danica Patrick’s 190th career start in the NASCAR Cup Series and her fifth at Homestead-Miami Speedway. She finished a career-best 18th in the Ford EcoBoost 400 in November 2014. In three NASCAR Xfinity Series starts, she led a total of eight laps and earned a career-best effort of 13th in November 2012. In five IndyCar Series races at Homestead, she scored a second-place result in 2010 and earned two top-10s.

Season Stats: Entering the 2017 NASCAR Cup Series season finale, Patrick and the No. 10 Aspen Dental Ford Fusion team for Stewart-Haas Racing (SHR) have earned one top-10, five top-15 finishes and 14 top-20s. Patrick has led a total of seven laps and holds an average starting position of 22.0 and an average finish of 23.5. She is ranked 27th in the driver point standings.

Career Stats: Patrick will make her final start in the No. 10 Ford Sunday for SHR. During her time with the organization, Patrick and the No. 10 NASCAR Cup Series team have earned seven top-10s, 21 top-15s, 65 top-20s and one pole award.

Aspen Dental: With more than 600 offices in 36 states, Aspen Dental-branded practices offer patients a safe, welcoming and judgment-free environment to get the full range of dental care they need along with the convenience and speed of onsite denture labs. That’s why the Aspen Dental network of independent dental care providers is one of the largest and fastest growing in the U.S. and saw more than 1.5 million patients in 2016. To find out more about how Aspen Dental practices make it simply easier for each of their patients to get the healthy mouth they deserve, visit AspenDental.com.

For the History Books: Since Patrick began competing in NASCAR on a part-time basis in 2010, she has made plenty of history. Here is a recap of how she has altered the record books through the years:

Became the first woman to win a NASCAR Cup Series pole when she set the fastest time in qualifying for the 2013 Daytona 500.
Led laps 90 to 91 of the 2013 Daytona 500, becoming the first female to lead NASCAR’s most prestigious race. She also led laps 127 to 129.
Became the first woman to lead a NASCAR race under green (Daytona 2013). Janet Guthrie led five laps under yellow in 1977 at Ontario (Calif.) Motor Speedway.
Finished 2013 Daytona 500 in eighth place, the highest finishing position ever for a woman in the “Great American Race.”
Finished 10th in 2012 Xfinity Series points, the highest points finish by a woman in the history of NASCAR’s top three series (Cup, Xfinity, Truck).
Competed in every NASCAR Cup Series race in 2013, becoming the first female driver to complete an entire season in the series.
Became the first female to compete in the non-points NASCAR All-Star race (2013) and Sprint Unlimited (2014).
Have the most starts of any female in NASCAR Cup Series competition.
With seven top-10 finishes, holds the record for the most top-10 finishes of any female in NASCAR Cup Series competition.

History Maker in IndyCar: Patrick became the first woman to win a major-league open-wheel race in a North American series in April 2008 by winning the IndyCar Series Japan Indy 300 at the Twin Ring Motegi oval in Japan.
Big Stage: In seven Indianapolis 500 starts, Patrick finished in the top-10 six times, including a third-place result in 2009, the best finish ever for a woman in the historic race.