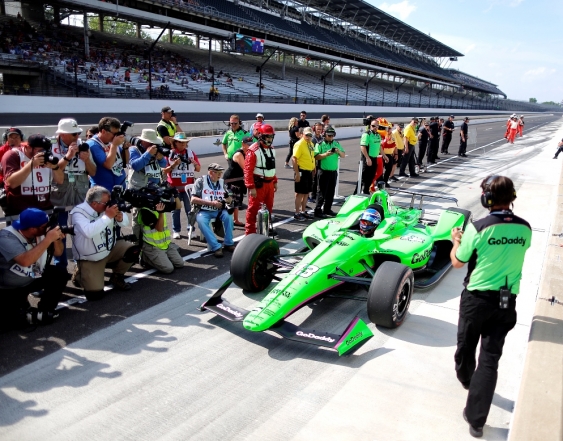 Danica Patrick and the No. 13 GoDaddy Chevrolet team for Ed Carpenter Racing will start the 102nd running of the Indianapolis 500 from the seventh position after she posted an average speed of 228.090 mph in Sunday’s Fast Nine Shootout qualifying session. The effort marks the sixth time she’s qualified inside the top 10 for the Indianapolis 500. Her teammate, Ed Carpenter, scored the pole for Sunday’s race with an average speed of 229.618 mph.

Danica Patrick, driver of the No. 13 GoDaddy Chevrolet for Ed Carpenter Racing
Talk about your qualifying run.
"Before I went out, I kept saying I wanted it to be a boring run, well as boring as it can be when you're going 230 mph or more. I just wanted everything to be predictable and flow really well. I was able to chase the car with my cockpit adjustments and try and keep the speed in the car the whole run. These are tough conditions when it’s hot and humid out here, and the wind is up a little, but overall, my run was as boring as you can possibly get. I'm happy with it, and looking forward to next Sunday."

Now that qualifying is over, what are your thoughts as you head to your final race?
“Some people were asking that on pit road right after I got out of the car. I'm like, guys, I'm within minutes (of qualifying). I'm not really thinking about (the race) yet. I’m not really putting a lot of thought into that yet, but that is what we worked on up until Friday. As far as the race goes, we're just going to get ready for the group running tomorrow. While we feel warm and fuzzy right now, because we're going really fast and you hold it wide open and everything is great, tomorrow is going to be a whole different day. I mean, it's going to be chaotic and there's going to be a lot of cars and there's going to be a lot of people complaining about not being able to turn. Tomorrow will be a big day to hopefully make one really good change to get it to turn and then fine tune.

Tune In...
ABC will provide live coverage of the 102nd running of the Indianapolis 500 starting at 11 a.m. ET on Sunday, May 27. IndyCar Radio will have live coverage as well.